My last girlfriend used to complain that my apartment looked like Miss Havisham's parlor (I always did go for the literate ladies). Now another woman wants to come up here and the place has metastasized into a one-room Collyer mansion. (As you can see at wikipedia.org/wiki/Collyer_brothers, the Collyers were well read gents, but truly awful interior decorators.)

It had reached the point where I would bring a package home, set it down and never find it again. I see now why old people make such a fuss over little things: minor details, unattended for long enough, build up into major disasters. Something had to be done; so I started in a total clean up which was to take me 4 months.

The hardest part was going through my books. People always say they can't bear to part with their books. I always held onto my books, the ones I enjoyed, with the intention of rereading them some day.

I had to admit though, at age 69 I would never be able to read all the books I wanted to; even another lifetime wouldn't suffice. And, given the choice between rereading a book, or picking up something new, I always chose a book I hadn't read before. What's more, my room had already reached the saturation point. In order to bring in a new book, I had to remove an old one.

Out went books I had already read . It wasn't much of a problem for fiction or genre novels, mostly mysteries - except for the classics of course: those I might want to consult at least, perhaps, some day - so I held onto them.

The Internet influenced other choices. All my maps and atlases got tossed. - its been decades since I've used anything but Mapquest. Art books which were falling apart also went: see Google image search. I suppose I could have gotten rid of 2 shelves of foreign language dictionaries and grammars - they haven't been used for years, but you never know when a really obscure word might pop up. Plus, there aren't any usable Greek- English dictionaries on the net.

Also given away were books in languages and subjects I hadn't quite mastered: medieval philosophy in Latin or Italian poetry. I once read that Shelley learned German from reading Goethe, so I picked up an edition of Faust with English notes & vocabulary - to become like Shelley. That went on the discard pile. But then I realized - Faust is a classic - so back it went back into my shelves.

All together, I had 15 boxes of books packed up and set out in my hallway for the people in the building to pick through. I also set out about half of my belongings. The books hardly moved, not much demand for Averroes in Latin, but my heavy furniture quickly disappeared into my neighbors' rooms.

I was going to sell the remaining books at used stores. But then my friend, Dwight Hobbes, told me about Hidden Treasures Thrift Stores which will come to your place and pick up your books. I thought a minute and realized that was a lot better than schlepping all over town to get, maybe, 10 cents on the dollar. One phone call and 15 boxes of books vanished from the hallway.

Used cd's are a lot easier to sell - a couple trips to Cheapo Records did it. But first I transferred my 500 + cd's to a 1 terabyte external drive, about the size of an old Modern Library Giant volume. In my lifetime I've seen 5 formats for playing music come and go: 78 rpm shellac disc, 33 rpm vinyl, cassette tapes, cd and mp3. The last is the handiest and I hope it sticks.

One final space-saver from the Internet. I had always wanted a coat tree by my door: it hardly takes up any room and it's right there when you take your coat off. But I could never find one. There weren't any "Coat Tree Stores" in the Yellow Pages and I never saw coat trees in a furniture store. I went on the Internet and had one delivered in 2 weeks. 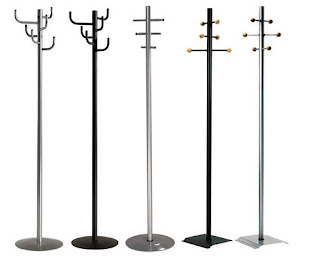 Finally when my son Ian came to help me cart everything off to resell or recycle or donate, it took us only a couple hours.


There was one last item I had to attend to. When I moved into my building about 20 years ago it looked like a hotel from a movie set, specifically the Bradbury from Blade Runner (a movie that's always given me comfort.) The hallways had no electricity. You needed a candle to find your way into the bathrooms. Whenever it rained or snowed, the ceilings poured and the walls flowed with cascades of water. It was like having an indoor fountain right in my room, for only $200 a month.


By now though, the landlord had plugged the roof.  My outside wall, by the windows, was left a slowly crumbling heap of plaster. Several coats of paint weren't enough to hold it back. Fortunately my friend Scott Vetsch lavishes the same care and precision on home repair as he does on his poetry. He looked at the wall and had it taken down to the brick in 2 days for half what a commercial contractor would have charged.


Finally, somewhere in the world. I had made a place for myself. With the masterpieces of literature, history and music were all at my fingertips, I had my life back again.

<<<   "The rooms in which writers (that subspecies of readers) surround themselves with the materials they need for their work acquire an animal quality, like that of a den or a nest, holding the shape of their bodies and offering a container to their thoughts. Here the writer can make his own bed among the books, be as monogamous or polygamous a reader as he wishes, choose an approved classic or an ignored newcomer, leave arguments unfinished, start on any page opened by chance, spend the night reading out loud so as to hear his own voice read back to him, in Virgil's famous words, under "the friendly silence of the soundless moon."
Alberto Manguel- The Library at Night ..
Posted by TCBard