I think almost everyone has made it to Paris before I ever visited, so I won't bore you with descriptions of boulevards lined with stone 5-story buildings whose mansard roofs are pocked with dormers, as you are probably already familiar with them. Nor will this account include the inevitable visit to the Eiffel Tower, as I didn't go there. In fact, I missed so many of the usual landmarks as to almost guarantee a return trip.

I always wanted to go to Paris, as most people do. When my friend Chris announced that he would be visiting the city with his granddaughter, Marielle, I decided that even on my limited budget I could manage to go for a long weekend and meet them in the City of Lights.

The Tunnel crossing wasn't all that interesting. Tourist class made the train ride far less comfortable than Amtrak, but still much better than Greyhound. The ride was so smooth that when we were in the tunnel and had no visual clues as to the movement of the train, it felt like we were standing still. A few people tried to make phone calls until they sheepishly realized that they couldn't get a connection deep under the English Channel. 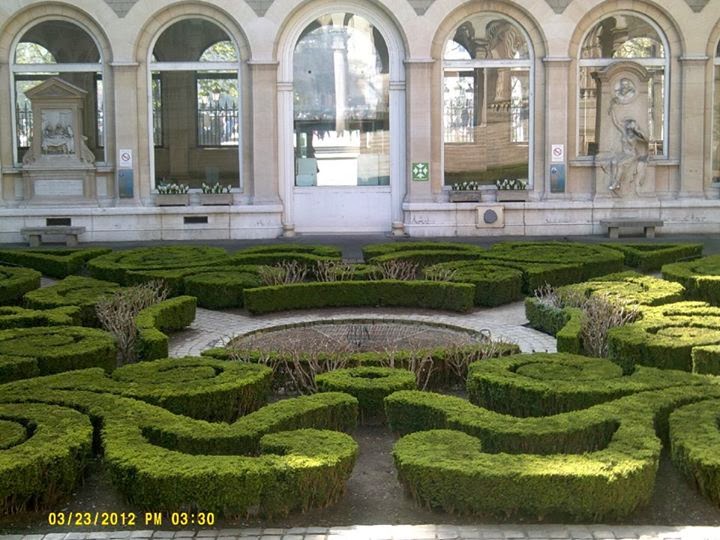 I arrived in Paris hungry. I met up with Chris and Marielle, and we found a sidewalk cafe. The beef bourguignon looked good, so we all ordered that. We split a bottle of wine. The cafe dog, a Scottish terrier, kept us company. If the portions of bourguignon had not been so generous it would have been difficult surrendering any tasty scraps to the dog. The creature was an expert. He looked up at us with great affection, creasing his eyebrows in such a woebegone manner that it was impossible to deny him a few morsels of food.

The conversation was as good as the food. Three hours melted away in what felt like a matter of minutes. Chris confessed that he had always felt that his true calling was to live in Paris as an artist. I think that would be suitable indeed. Paris fits him. I think he feels it's a little too late, however, for him to do this. I said that I thought that he would never be too old to move to Paris and pick up a paintbrush.

I retreated to my hotel after dinner. Quite cheap for Paris, Hotel Picard is not for those who expect hallways to be vacuumed on any kind of regular schedule. My tiny room included a sink, but the toilet was down the hall. The sheets were clean, which is all that really mattered. I didn't come to Paris to spend my time in the hotel, although it was nice to be in a comfortable bed. I fell asleep in an instant. 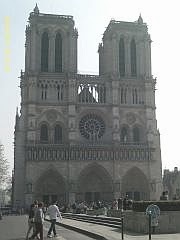 After a continental breakfast in the hotel the next day, I braved the mean streets of Paris on my own. The best thing about my scruffy hotel was its location in the Third Arrondissement. I walked to Notre Dame; it was about a mile from the Picard. On the way there, I was dazzled by the sites and especially the smells of the city. I've never been to a city that smelled so good. Some trees were already starting to bloom, and flower stalls were everywhere. Sidewalk cafes scented the air with the smell of luscious food, and ladies perfumed the air with, well, perfume. The aromas of Paris are part of what makes it such a sensuous, seductive city.

I wandered about Notre Dame and took a few pictures. There must be something wrong with me, because what impressed me most about Notre Dame was the incredible volume of tourists filing through and milling about the place. After a while, Marielle met me and we went shopping in the Latin Quarter. We had a lot of fun. She's quick-witted and outgoing. I really enjoyed her company. What can I say? She laughed at my jokes.

Chris had been motivated to come to Paris on this particular weekend because his friend Mina, a jazz vocalist, had asked him to come and read some poetry at one of her performances in town. Before I came, I had imagined this gig as taking place in some night club or other. I began to suspect it was something bigger when Chris mentioned that Mina had organized the event, taking all the risk, and that she needed an audience of at least 700 or so to break even. She'd sold over 500 tickets in advance, so it seemed that she would probably reach her goal.

As Chris's friend, I was fortunate to score a spot on the guest list and a backstage pass. The venue was a beautiful old hall with gilt moldings, chairs upholstered in red, and naked angels framing the proscenium arch. I got a seat in the front row. The theater quickly filled to capacity, and it was obvious that Mina had surpassed her attendance goal. There had to be at least 1000 fashionably dressed Parisians in the audience. 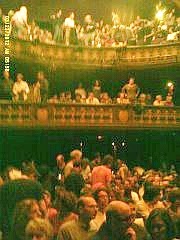 The opening act was a jazz pianist, the same pianist who would be one of the musicians accompanying Mina later in the night. He was breathtaking. One piece that I still remember fairly well used baroque pieces that would have been familiar to most fans of classical music, and riffing off from them. As you know, baroque music is pretty complex, and for that matter so is jazz; the blending of the two worked very well.

I finished my business and returned to the auditorium. The house lights came down, and Mina Agossi performed.

I don't think I could ever write music reviews. I lack the descriptive skills to put into words what I've heard performed. Backstage after the show, I told the musicians the performance was "magnifique", which it was, but my choice of words was definitely influenced by my limited knowledge of French adjectives. How do I describe to you, my Anglophone audience, how I was transported by Mina's singing? She did a duet with the trumpet player, and at times I could not tell whether I was listening to the trumpet or to the sound of Mina's voice. Now that is a jazz vocalist. If my words are unequal to the task of description, have some pity on me, because the transcendent is not, by definition, easy to describe. You can check out her website, but I must warn you that the sound files there don't measure up to a live performance. A Nomad Voce Mina shared the stage with a variety of performers. Towards the end, Chris came out and read poetry. I could tell he was nervous. His style of poetry fits easily with jazz; Chris is something of a beatnik, and I think it shows in his poetry.

The evening's entertainment was exceptional. It exhausted

me just to watch it. I felt positively wrung out. I went backstage to join Chris and Marielle. As you can imagine the musicians were in catharsis; exhausted and invigorated at the same time.

The next day I walked to the Bastille. Paris is a splendid place to take a walk. So much of life happens on the streets. In the Midwest we become accustomed to living in buildings and cars. Our public spaces are as likely to be skyways as streets. In Paris, everything seems to happen outside, where people eat, walk, shop, and romance each other. People-watching in Paris is riveting. Everyone is dressed up and no one is dressed alike. One of the most exotic fashions that I witnessed, the image of which I shall carry to my grave, was a sharkskin tracksuit. A gentleman walked past me wearing this outfit made of sharkskin cloth that was cut like an ordinary business suit, with the exceptions that it had stripes going down the legs, and a hood attached to the jacket.

That evening, Marielle, Chris and I walked along the canal in  search of liquid refreshment. As it was Sunday night, we discovered that most places were closed. We walked into a somewhat seedy neighborhood. Two beggars followed us for a while.

Ultimately we shook the beggars and found a bar that was open. It was nearly empty, as though it had been waiting just for us. We sat at the bar and easily fell into another epic conversation that lasted for hours.

The attractive bartender gave us free shots at one point, and later made Marielle a free piña colada. As the youngest and prettiest of our small group, it was natural that Marielle attracted most of the attention from the notoriously flirtatious French men. Chris and Marielle related a story about how one man had actually taken her by the arm and tried to walk away with her. Chris had to intervene. The lesson being if you come to Paris with a pretty, young woman be prepared for a certain amount of attention to come her way. Marielle made the point, however, that most of the flirtation she received was not obnoxious. I had to agree with her that on the whole, French men were entirely sensual without being overbearing. I related my little story of how I bought a scarf. I let the attractive merchant pick the color. He then draped the scarf over my shoulders, just so. I almost felt he was making love to me, right there on the boulevard. It would never be so sexy to buy a scarf in America.

All good things must come to an end, and so, too, must trips to Paris. I left town the next day, determined to visit Paris again. In just four days the town had lived up to my expectations.
Posted by TCBard