I'm not sending out Christmas cards this year so here's the digital version of the traditional mimeographed sheet of  family news people used to send out.

My medical condition and prognosis have improved this year. Last January my doctor was telling my family there were some spots that looked ominous: I might be gone in 1 to 5 years. Now the spots are gone and the inflammation caused by my radiology has subsided. I don't carry around oxygen tanks any more; I can walk for at least 4 blocks without stopping or even climb a short flight of stairs.

I also got to some demonstrations for the first time since I was diagnosed with cancer. In January thousands of people turned out downtown to protest the new immigration laws and in Spring there was a huge March for Science at the State Capitol. I can't keep up with the marchers and I get out of breath chanting but at least I can show up. 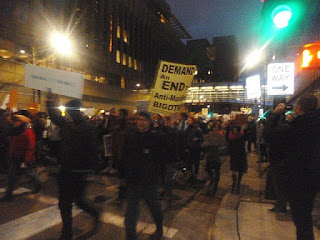 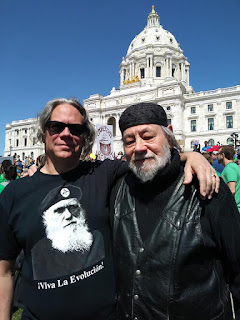 I was also interested in the elections last November - somewhat to my surprise because I've never cared much about electoral politics or the United States either. In my old age I've found I do care deeply about Minneapolis and the infrastructure which has made my life here possible.

Unfortunately none of the people I voted for won. Still there is a movement to run leftist candidates in the Democratic Party. Given the history of third parties in the US this strikes me as a good strategy. If the extreme left had taken over the Democratic Party the way the extreme right took over the Republicans. we could have Communism here today. OK - that might not be such a great idea. In my old age I've also become less enthusiastic about the abolition of property, especially since I was driven from my home 3 years ago.

Otherwise I still get out a lot with my singer, Tabatha, her husband Rich, and Loren, her mother.

I can also walk out my back door and into a place called Gamut Gallery where they have frequent openings.

A less pleasant aspect of my current existence was running out of my savings in the middle of the year and being forced to go back to work. I'm doing customer service on the phone which is a nightmare. I'm not as good as I used to be at absorbing a lot of information and I don't have much patience with irate customers. It does bring in an income though which makes it possible for to live in a nice place behind an art gallery. One thing I never foresaw was the disappearance of affordable housing in the U.S.

It's also made it possible to indulge my passion for the arts, not only by supporting my friends' Kickstarter projects but also by commissioning a painting. Anne, my son Ian's wife, LOVES cats; this year she got 3 kittens. My friend Carly Swenson does pet portraits so I was able to get this done for Christmas this year.

Finally, here's a picture of my great grandson, Lennon English, on his 2nd Christmas ever. 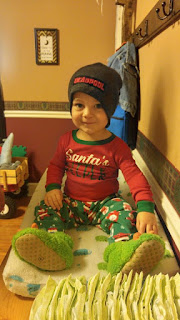