Time for the Left to Get Our Act Together

During World War II, we formed a Common Front with the imperialist powers in order to defeat a much worse enemy. We even armed Chiang Kai-Shek, though he turned those weapons against his own people. Now the Left - Liberals, Neo-liberals, Democratic Socialists, Communists and even this personal Anarchist - need to get together to halt the wave of Fascism that's sweeping the world: in the U. S. by means of the Republican Party, with the Nationalist alliances in Europe, the oligarchs in Russia, the ayatollahs in Iran and the gangs in El Salvador. What they all have in common is an authoritarian hatred of the freedoms and benefits of modernity.

Certainly I'd rather hold back Fascism while it's still possible through electoral means. This doesn't mean we're capitulating to the Democratic Party. There are many negotiations still to be made. Again, in World War II Britain promised India their independence in return for their support against the Axis powers. The U.S. made similar arrangements in the Philippines.

People remind  me that only revolution can bring real change. That may be true, however since the fall of the Berlin Wall it's become evident that violent revolution alone is no guarantee of change. The Twentieth Century saw many Communist revolutions but how many countries of those countries can genuinely say they're practicing Socialism today?

I would also point out that Republican love guns. Many of them have arsenals stashed away in their homes. And they're much more vicious than we are. They love guns so much, they're ok with children being gunned down in school. Also many Republicans have military training. This may not be a good time for us to start a civil war.

Closer to home, in Minneapolis we burned 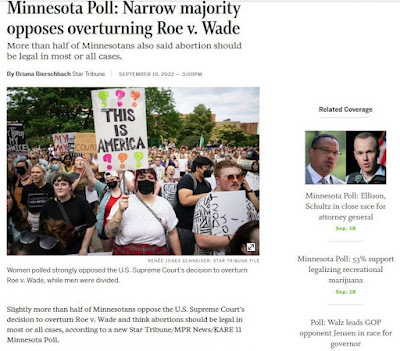 down the police stations! Is that revolutionary or not? And yet a year later a movement to restructure the police has gone nowhere.  It was defeated largely because we went into it behind a dumb slogan "Defund the Police" which sounded like we were going to abolish the police department with no nothing to put in their place. We need not only to control the streets but also the political process.

Really, we on the left love slogans too much. When our opponents raised legitimate concerns like personal safety, we gave them only vague assurances. I would suggest that there are issues which the left can make good on. issues on which a majority of Americans agree with us; issues which affect people on a personal level; issues like abortion, marijuana, gun control and even gay marriage.

In Minnesota these issues have only a slim majority of popular support. You may feel your one vote won't make any difference. It's true the chances of a single vote deciding an election are negligible but Minnesota does have a history of narrow margins. Recently Al Franklin was elected Senator by less than 300 votes, In 1962 a governor was elected by 91 votes. So yours could easily be one of 91 votes that saved women's right to abortion in this state.

Knowing that, wouldn't you sleep better at night?