Linn Allen was my roommate our freshman year at Haverford College. He's by far my oldest friend on the planet and one of  my best. When I was diagnosed with cancer he came right up from Chicago to see me. Linn is a musician, a writer, a poet and a playwright. A group called MCL Chicago was going to premier a musical comedy he had written as part of their festival. It seemed like a good occasion to return his visit.

Two other longtime friends, Linda and Jim Netzel met me at the bus station and took me out for dinner before us all heading to the show. Linn's play was called Muffins. It was set in a coffee house with all sorts of wacky characters romping through romantic and political intrigues. We had a fun time and Bonnie Janofsky, the composer, won a prize for best music.

I also took care of an item that had been on my bucket list for decades: Grant Wood's painting. American Gothic at the Art Institute of Chicago.  There's a personal connection here.  For 30 years I lived in the Handicraft Guild Building where Grant Wood studied in 1910. Our paths must have crossed many times in space if not in time. Maybe we even have sat on the same toilet at different times - the plumbing there was ancient.


The painting is popularly taken as a literal representation of traditional American values Like any powerful graphic icon though, it is brimming with ambiguities. The pinched expression on the two faces could

easily be interpreted as caricatures of the meanness of farm life. Grant Wood originally explained it as a portrait of a farmer and his wife. Then he said it was a farmer and his daughter - which would reflect a common situation where the farmer's wife died in childbirth, the sons would move to the city and the daughter would grow prematurely grey and grim taking care of the old man; or perhaps even serving him as a "wife" in other ways.

Another ambiguity is displayed in the Carpenter Gothic style window of the farmhouse suggestive of a church - guarded by a Devil's pitchfork brandished by the farmer. One detail I had never noticed before was the slender church steeple past the woods behind the farmhouse, a steeple which did not exist in the town where the actual farmhouse is located. The most striking impression though, when you're standing looking at the painting, is that the farmer is glaring back at you with an expression of stunned horror, like a deer caught in oncoming headlights. And, up close, there's no mistaking the  look of utter despair on the daughter's face. 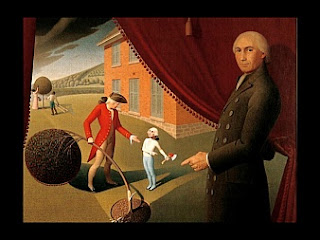 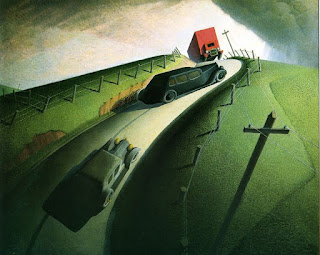 The Art Institute of Chicago has a number of Grant Wood's paintings. I enjoyed his play on the iconography of the Founding Father in Parson Weem's Fable depicting George Washington of the cherry tree with a face from a 1 Dollar bill. Death on Ridge Road sets out a darker, more contemporary fable with obvious religious symbolism.

At the Art Institute I was finally able to connect with an old "friend" whose acquaintance I had made many, many years ago. I saw the 1945 movie of Oscar Wilde's novel, The  Picture of Dorian Gray 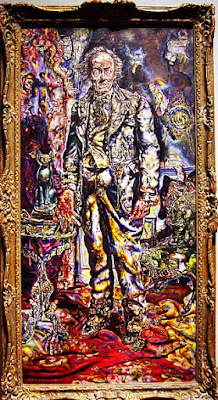 before I even went to college. It is the story of an aristocratic young man in London who never ages while a magical portrait of him shows not only the vicissitudes of age but also the ravages of his life devoted to dissipation and sensuality. At he age of 17 that struck me as a capital idea! I decided I would devote my life to pleasure and always look young. That lasted into my fifties before I decided to trade it in  for the "battered but not yet beaten" look.

It's a great movie. The noirish aesthetic is perfect for the alleys and byways of Victorian London. It stars Angela Lansbury, Donna Reed and Peter Lawford all very young, also Hurd Hatfield as Dorian and George Sanders, peerless as the corrupter. The most memorable item, though was the painting of Dorian Grey at the age of 40. Surely this wasn't just something ordered up from Props. Was it painted specially for the movie? What else did this fantastic artist do? Who was he?

The painter's name is Ivan Allbright and the painting hangs in a gallery of the Art Institute of Chicago. They have several of his works, all illustrating human flesh in various stages of decay. This self portrait at the age of 38 shows him as a bloated and withered old man. Every painting is executed in minute detail taking him years to finish.

My college friend, Linn, tells me the expression "ugly as picture by Ivan Albright" was a stock phrase in his family, so I'm not the discoverer of this uniquely talented and obsessive artist of the grotesque.  The Art Institute has many obscure treasures to be discovered. The are also plenty of familiar landmarks on display; you turn a corner and the Grande Jatte is laid out before you. In another gallery the Nighthawks give you room at the counter.  They have a whole room full of Gauguins, others of Monets, Renoirs.  They call themselves the Best Art Museum in The World. I don't buy that but I do think it's the best collection in the US of early 20th century art.  I've been thru Chicago dozens of times and I don't know how I missed the Art Institute before. I hope I don't miss it again.

PS In 2018 the Art Institute had a special show

Ivan Albright and the shock of the 'Flesh'