My Favorite Concert of the Year

Sugarland at the Minnesota State Fair. I discovered their video one night staying at a motel somewhere off an Interstate. The women have the perfect country western twang that plays right to your heartstrings. I"d never been to a State Fair concert before and there was an atmosphere of shared enjoyment in the crowd. 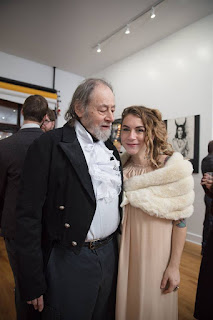 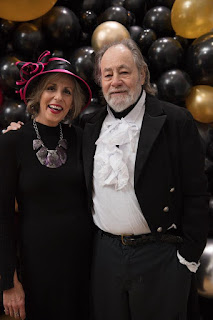 Annual Members Gala: A Fancy Pants Party at the Gamut Gallery in November. with Tierney Houdek and Tamara Garrison. (Gamut gave me a free lifetime membership.)

Why Choose This Book?: How We Make Decisions
by Read Montague
On the biochemistry of the brain as it makes choices, The question of free will seems easier to understand if you ask about making choices. Choices, to make any sense, are driven by motives and motives which, even at their most rational, are dark and chaotic chemical reactions. I can't say whether or not we possess Free Will but I do know that we love the the act of blaming.

My Favorite Moment in Sports

The Miracle in Minneapolis

on Amazon or Amazon Prime. In 2018 I particularly enjoyed
Line of Duty: a British police Series which takes place in a bleak gritty morally ambiguous port on the North Sea with characters to match.
The Coroner: a British crime series which takes place in a bright, sunny seaside resort with attractive characters (Claire Goose!!!) Avoid Broadchurch for fun at the beach!
Harper's Island an American thriller with a "And Then There Were None" structure.

The doctors have found no changes in my lungs. It's been 4 years now and in another year I'm considered in remission from cancer. I still suffer from Chronic Obstructive Pulmonary Disease (COPD) but that's improved to the point where I no longer carry around oxygen and I can walk several blocks at a decent pace without stopping to catch my breath. I can probably blame smoking 2 packs a day for 50 years for my condition. Was that my own Free Will? I can't say, but the older I get, the more I appreciate at least the illusion of agency.

The best news is that I have my old job in downtown Minneapolis again. This puts me back where I was 4 years ago, before they saw a spot on my lungs, before the crazy guy drove me from my home, before my office shut down. Now everything is where it was then except I'm paying $400 more in rent; but then so are a lot of people.

Syd Ginsburg, my former mother-in-law's, 90th birthday. Here she is at the big family reunion in North Carolina. The babe in arms is Lennon Elliot English, her great-great-grandson and thus, my great grandson, whom I met here for the first time.

I added the 97th, 98th, 99th and 100th people to my Band Box Album. Fittingly they were JP and Jade Patrick and their two adorable children Roland and Darwin. Jade and JP are owners of the Gamut Gallery just around the corner.

There's a "country" I belong to now: Minnesota

Everyone knows we elected Ilhan Omar, the first person to wear a hijab in the U.S. Congress; also that Keith Ellison became the first Muslim State Attorney General in the U.S.; or even that Minnesota Lieutenant Governor Peggy Flanagan is the second Native American woman to ever be elected to statewide executive office in U.S. (although you might not realize she's also a fine singer).

However you probably don't know about Dave Hutchinson, a gay man, who was elected sheriff of Hennepin County pledged not to cooperate with the I.C.E. (Immigration and Customs Enforcement.)

The campaign pickup up steam in the last two months with people from every faction of the Left posting their support. Days before the election one of the original punk bands put together a benefit. 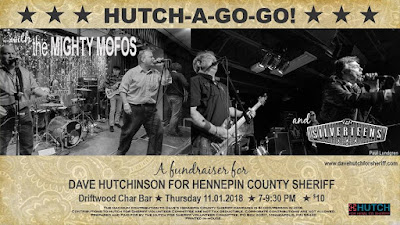 This is the first time in my life that I've felt myself a part of any polity. Having grown up all over the world I never felt any loyalty to any particular nation and New York City is really more a state of mind than a political entity, But if there's a land where the Communists, the Anarchists and the punks can get together and put a sheriff into office, I would belong there.
Posted by TCBard