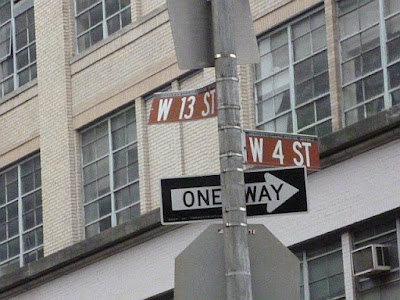 Floyd Dell wrote, in Love in Greenwich Village, that the Village was born in 1913, 100 years ago. By the time he was writing in 1926,  Greenwich Village wasn't what it used to be, he said: the Village had already died.  These days people tell me that New York has become totally gentrified, that it's turned into an urban theme park.

Much of that is true. Times Square has become a new Disneyland. There's a MacDonald's on Astor Place. CBGB's is now The Bowery Electric. In Bowery diners where hopeless drunks once lingered over their thin gruel, I have seen yuppies munching $17.00 hamburgers. Still, New York is a city where you can get a pastrami/rye with the works at midnight, in fact you can get anything you can imagine 24 hours a day.


The culture is still there too: in 7 days I attended a lot of excellent jazz; I listened to Tudor madrigals at Lincoln Center while sitting next to Nico Muhly , the composer; I heard the world's top player of the Argentine bandoneon in concert with the top Portuguese vihuelist; I met an excellent poet, Boni Joi  at a reading on Cornelia Street. I saw major exhibits by Chris Burden and Magritte. While exploring the new museum at the Custom House, I learned about a Minnesota painter, George Morrison and, on my last night, I watched a documentary about the creator of Calvin and Hobbes. 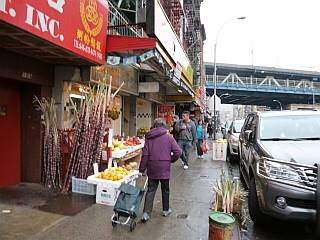 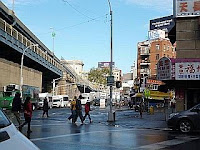 I was lucky to find a hotel on East Broadway, an area seemingly unchanged from the 1960's when I lived in New York. It seems to be an extension of Chinatown only more so. It smells like raw fish and the menus are not translated into English. It"s bustling late into the evening with food and clothing and cell phone stalls and there are children playing in the park. There's only one coffee shop - not a Starbucks but a kosher establishment called 12 Corners - kosher, no doubt because it's next door to an Orthodox Temple. 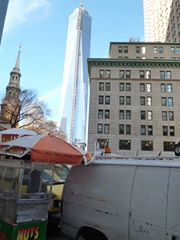 One big change in the skyline is almost complete: the World Trade Tower. With the heavy base it resembles a cenotaph which. in a way, it is. It doesn't inspire much joy amongst New Yorkers. My friend Josh Max said it reminds him that he lost two friends on 9/11. Also it's a reminder of all the horrible things that have been done in the name of 9/11. And, I hate to say it, but I'm sure it screams "target" to some people.

The other big new attraction in New York has a playful spirit (http://www.thehighline.org/). There was an abandoned elevated railroad running about 3 stories above the street along the west side of Manhattan. After several decades it had gone literally to seed. Shrubs were blooming on the platforms. Trees had sprouted between the rails. Nature was reclaiming her own. 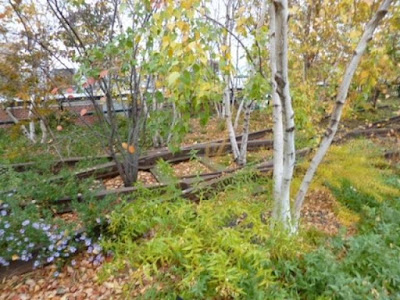 The City Parks Department made a walkway out of the old tracks. It winds around the condos and offices and straight though some buildings. It's well used by tourists and by New Yorkers jogging or strolling, The effect is to create a 3 dimensional urban labyrinth like the old cites of Europe or the casbahs of the Middle East. Perhaps a model for Minneapolis' skyway system? 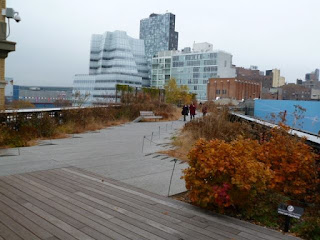 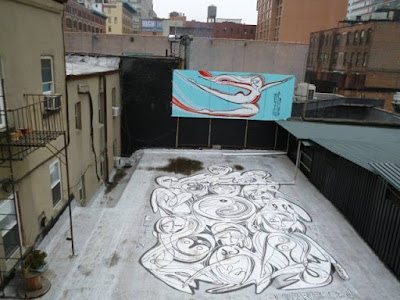 In fact great cities are always in a process of dying and renewing themselves. Sometimes the process is violent and public, like 9/11. Sometimes it's small and lonely: I used to see furniture and personal effects piled in front of an apartment where someone had died - and no one ever claimed their belongings. Sometimes death is vast and quiet like the city of Detroit. But as long as New Yorkers are still bringing new life to their old buildings, as long as children are still playing in the parks, the city will survive.
Posted by TCBard