Venus de Mars, along with her spouse, Lynette Reini-Grandell, have been invaluable helpers in my career as a poet. Lynette had me on her radio show numerous times, Venus rented me her studio to shoot my poetry video book, An Invitation to the Terrorists Ball, She also appeared in the video and performed at the release. For my Invisible Jazz release, she lent me her fog machine.

Venus is another one of my multi-talented friends. She's one of the most emotionally expressive singers in town, both as a soloist and with her band, All the Pretty Horses.  She's equally expressive as a painter of gender fluidity and here, the vegetative fluidity of urban structures. And now she's writing a book! Check her out at Venusdemars.com/arts.

Me, Venus & Tabatha, my singer from Invisible Jazz 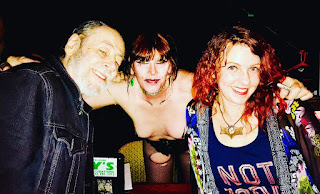