Events and milestones in 2020 were hardly much to celebrate, although creatively it was my most productive year in over a decade.  I also had lots of time to reflect upon myself. My personal and political meanderings are set in italics, in case you want to skip over them. Additional props this year to my son Ian who dropped off my groceries when I was in quarantine and joni and Brooke for bringing treats, my granddaughter Marielle who helped transport my computer from work,  my friend Ed who calls periodically to make sure there's someone around who's even older than him, Cassie Garner who's running an art gallery in the middle of a pandemic and my oncologist, Naomi Fujioka M.D.

Bojack Horseman The best thing on television since The Wire: all-too-human animals trying to find self-esteem in a meaningless world. The ending is almost as dark and ambiguous as the ending of The Sopranos.  Recommended by Emily Temple.  I had just finished the series when I contracted the virus; then I watched it all over again, for the graphics.

Faith Boblett/Flamin'Ohs in the alley behind the old Loring Bar. Video of the Flamin'Ohs courtesy of Jon Copeland whom I hardly ever see since our First Avenue days. This was my only live show all year.

The Best Book I Read.

The Selected Poems of Frank O'Hara
Music
If I rest for a moment near The Equestrian; 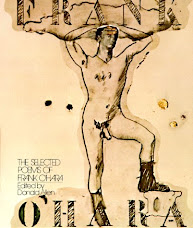 pausing for a liver sausage sandwich in the Mayflower Shoppe,
that angel seems to be leading the horse into Bergdorf’s
and I am naked as a table cloth, my nerves humming.
Close to the fear of war and the stars which have disappeared.
I have in my hands only 35c, it’s so meaningless to eat!
and gusts of water spray over the basins of leaves
like the hammers of a glass pianoforte. If I seem to you
to have lavender lips under the leaves of the world,
I must tighten my belt.
It’s like a locomotive on the march, the season
of distress and clarity
and my door is open to the evenings of midwinter’s
lightly falling snow over the newspapers.
Clasp me in your handkerchief like a tear, trumpet
of early afternoon! in the foggy autumn.
As they’re putting up the Christmas trees on Park Avenue
I shall see my daydreams walking by with dogs in blankets,
put to some use before all those coloured lights come on!
But no more fountains and no more rain,
and the stores stay open terribly late.
Frank O'Hara was part of a movement in the 1950s called School of New York. It included painters like Jackson Pollock and Larry Rivers and poets John Ashbery and Amiri Baraka (FKA LeRoy Jones) and others. O'Hara wrote of them: "we divided our time between the literary bar, the San Remo, and the artists’ bar, the Cedar Tavern. In the San Remo we argued and gossiped: in the Cedar we often wrote poems while listening to the painters argue and gossip.”

In Music the poet is on his lunch hour in New York City near the equestrian statue of General Sherman. He imagines the horse tromping into a fancy department store and he gets anxious - anxious about a lot of different things like wars, money, his own sexuality, winter coming, Christmas shopping.
What I look for in poetry is passion and intelligence (OK, I look for that in everything).  O'Hara gives us both in the way his poem mixes the mundane and the surreal:  specific details like the Mayflower Shoppe, Bergdorf's, the Sherman stature, Park Ave, 35 cents) embedded in vague moods  ("If I rest..."', "If I seem...", "close to..." "foggy Autumns," "terribly late".  I love the relaxed conversational tone he adopts to build poetic devices: assonance in the sequence of open vowels in "pausing", "sausage", "Shoppe", "horse" "Bergdorf's" "cloth" and the  liquid alliterations of "lavender lips under the leaves." (which I take as a coded reference to his sexual orientation).
Most of all I love his misplaced punctuation and his jumble of images: "naked as a tablecloth", "hammers of a glass pianoforte", "a locomotive on the march", "daydreams walking by with dogs in blankets". This has been called difficult poetry but I would say it's only as difficult as you want it to be. Trying to make sense of these images strikes me as futile as looking for faces in Jackson Pollock's spills and splatters or a melody in the electric feedback drone of a contemporary noise band.

All right; "Clasp me in your handkerchief like a tear." is a lovely image that packs a life-long love story into 8 words.  In "a locomotive on the march" the two nouns complement each other in evocative ways. But "naked as a tablecloth"? No way you'll  ever pull a coherent image from that; all you can do is let it bounce around in your brain until it slows down enough for you to react.
Sometimes I'll binge read on a particular topic. In 2013 it was Japan: Nobel authors, mystery novels, folk tales, arts, music, baseball, etc. Five years ago it was Byzantium including John Julius Norwich's magnificent 3 volume history. This year I've read half a dozen books about the School of New York. I wonder why I hadn't heard about the movement before. I started hanging around New York in the late 50s when I was 17 and  I even partied in Red Groom's studio. Probably because the Beat Generation started right then and so, when I went to the City, I headed to the Beat coffeehouses instead of artists bars.


The Birth and Death of Meaning: An Interdisciplinary Perspective on the Problem of Man by Ernest Becker

I've always relied on Marx for the social sciences, but with Trump supporters drinking bleach it seems like rational self interest is not even an item any more!  Marx is fine as a macroeconomic prophet but I've felt the need for anthropology and sociology to unravel the complexities of human interactions.

The Saddest Day in Sports

Tom Seaver dies at age 75   Couldn't get into empty stadium sports.
They called him The Franchise or Tom Terrific but I always thought of him as Mr. Seaver for the confident unassuming mastery of his art. So many memories: the almost perfect game, the 10 straight strikeouts, his tears when they traded him away. When the Mets won the world Series in 1969 the whole city erupted in joy. The fans mobbed the field. I was working for an insurance company in the Wall Street area and office workers opened their windows and dumped any paper at hand - it was the beginning of the computer era, so no ticker-tape, but the sky was filled with IBM punch cards that read Do Not Fold, Spindle or Mutilate.
Normally hard-bitten, cynical New Yorkers were hugging each other on the subway. In the streets around Grand Central Station, people passed around bottles of champagne and danced on layers of paper trash. It's a moment I will always remember!